No new episodes scheduled: It was fun while it lasted.

On today’s very special Friday edition we have the man of the sea Jay Fanelli. You might know Jay for his work making gold encrusted t-shirts with United Pixel Workers, making design things at Full Stop Intercreative Things and doing voice-over work for trampolines and broccoli.

When Jay isn’t weaving and sowing, he spends his time in the City of Pitts collecting drumsticks and donating used clothing to people in countries that need used clothing while following his true passion in life, the open sea and studying to be a sea captain.

Today’s episodes is not sponsored by T-shirts or Flat Design. 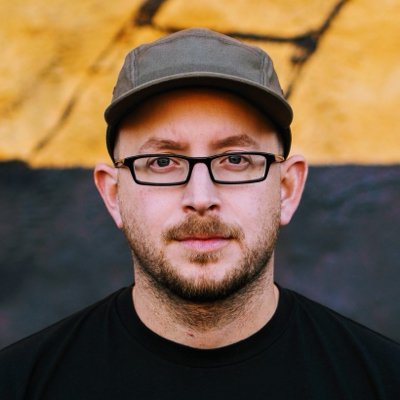 I’ve been aware of Jay’s work with United Pixelworkers (and Full Stop) for quite a while. At some point several years ago I grew tired of “clever” t-shirts, mostly because I’m a grown up, but also didn’t want just plain white tees. United Pixelworkers came to my attention somehow (who ever remembers who they hear or learn of things with the prominence of Facebook/Twitter/Reddit/Digg/et al) and I loved that they had simple, graphic shirts that were also amazingly comfortable (which Threadless was not).

Through various Twitter interactions and exchanges the fellas at UP asked if I could turn my graphic I had done (basically a sign for people with kids who work at home) into a tshirt for them. Which is neither here nor there.

Jay and I got along amazingly well, even though he’s from Pittsburgh. We talked for over 2 hours about everything; which is sad that the show itself is 6 minutes of stupidity (and that’ll never change).

Just more evidence that this show has benefited me more in making new friends than anything.